Barbara Lawrence: Art with Heart and Style
by Sharon Rockey

For some reason, I’ve never outgrown my need for the whimsical art that illustrates children’s stories. It’s that irresistible happy-hearted, wildly colorful art that says, “you are now entering the magic kingdom of your own imagination”. It’s the kind of art that Barbara Lawrence so expertly and effortlessly allows to spill out onto paper and computer screen.

Even if you don’t have children, unless you’ve been living in a multimedia-challenged cave, you would have seen and enjoyed some of Barbara’s work at those new media conferences where they present the latest innovations in multimedia software.

Barbara Lawrence was on the very first “Living Books” team at Broderbund Software and created the delicious background illustrations for such ground-breaking children’s software as “Just Gramma and Me and the “Tortoise and the Hare”.

I recently had the pleasure of entering Barbara’s magic kingdom where she works and plays. Seated inside her snug little white cottage which serves as both studio and home filled with art, antiques and precious exotic treasures, I could look out onto the lush gardens, tropical plants and the two love birds, Cricket and Pocket, and get a glimpse into the wellspring of her creative spirit. I also gathered a few necessary vital statistics.

Barbara is a native Marin resident with both feet firmly planted in the art world. She was an art major at College of Marin, studied graphic arts at California CETA, design at California College of Arts and Crafts, and illustration at Academy of Art in San Francisco, in addition to running her own graphic design business.

It was during her period at the Academy of Art that the Mac II hit the scene. As Barbara was seated in front of a computer screen experimenting with this new digital canvas, suddenly something clicked – and I don’t mean that thing you do with a mouse. The ability to create art digitally opened up a completely different world for her, it fanned new fires and sparks began to fly. 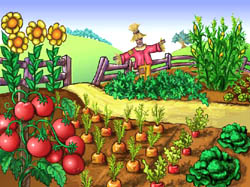 She was perfecting her skills in this new medium when a casual glance at the classified ads triggered the next big turning point in her career. Broderbund was seeking a graphic artist.

“I knew I was perfect for the job”, Barbara recalled, “and I was in the right place at the right time. I was so excited and enthusiastic during that first interview, I just remember hoping no one would notice I was seated about two inches above the chair!”

Barbara was then assigned to the new “Living Books” division and did illustrations for the titles mentioned above, plus “Arthur’s Teacher Troubles”, “Arthur’s Birthday”, and many of the illustrations you find in Broderbund’s “Print Shop”, “Kid Pix Studio”, and “Amazing Writing Machine”. Not exactly insignificant additions for any artist’s resume!

After completing almost nine rewarding and fruitful years at Broderbund, Barbara is now focusing on her own computer and fine art illustration business. She’s also managed to spend time on her fine art paintings. Her recent showings include the Marin County Fair, San Geronimo Cultural Canter, Bank of Marin with the Marin Watercolor Society, and Two Bird Cafe at the Valley Inn. You can see her work now and through the end of September at the Community Congregational Church in Tiburon and in November at the Fairfax Library.

Barbara received a merit award at the 1997 Watercolor Magic Watermedia Showcase and was a winner in NBMA’s 1998 Best of the North Bay Showcase Competition, placing second in the Digital Arts category.

With such a rich and well-seasoned background, Barbara is currently working on new projects in her own business and continues to expand her client base.