I didn’t know what had become of the sweet little pre-teenager who had once read me to sleep from the Tao of Pooh. She never knew how grateful I’d been to hear her innocent voice reading those comforting passages—words that drifted into the night air and dissolved into silent tears.

Being a single parent was a harsh reality for both of us, and most of the time I wasn’t sure I could hold it together. She would suffer through long hours of my being away at work and weeks of study as I struggled to pass the Securities Exam. I barked at her for expecting me to stop and help her with her own homework, until that evening she came and pulled me away from the books and into the living room, turned on the stereo and made me dance. As the music washed over me and we spun around the room laughing, it was if I was experiencing physical sensations for the very first time. She was only fourteen. Where had she learned this magic?

And now she was leaving for college, and . . . she was angry. Who could blame her? I’d been so caught up in my new career, she’d gotten lost in the shuffle somewhere during those precious high school years. But I wouldn’t have known how to be there for her even if I had realized the depth of her unhappiness, nor was I fully aware of the huge disconnect between us. It seems that being a good mom takes more than feeling proud of a child and bragging to your friends.

As the time grew near, my anxiety over her leaving was made all the more heart-wrenching by our inability to communicate. Finally, I made a desperate and radical suggestion, something completely foreign to both of us—we scheduled an appointment with a therapist.

It wasn’t as if I expected a therapist to undo the damage that had been years in the making. But I sensed that my daughter had a lot that needed to be said before she left, and whatever it was, she wasn’t saying it to me.

For most of the hour, we sat looking straight ahead at the therapist, rarely glancing at one another. She spoke, I replied. I spoke, she replied. The therapist was amazed at her honesty and how articulately she expressed herself, how well reasoned her conclusions were. It was obvious to the therapist that this young woman understood how my acts of commission and omission had affected her life. Her words were ruthlessly painful for me, but cathartic at the same time.

I wanted to believe that the session had offered something of value for her. I knew it had for me. The therapist asked us to make this pact: I would promise to take a whole day off from my job and celebrate it with her. My daughter would choose three things she wanted us to do and at the end of the day, each of us would present the other with a gift that we had made ourselves—something that would represent our Rite of Passage Day together.

We set a date a few weeks out and started thinking about what we would make. I was stunned to discover how difficult it was to keep my end of the bargain. The ideas kept getting pushed aside by immediate projects at work. At one point, the whole ritual day plan had become so faint in my mind, I found myself entertaining thoughts of just forgetting the whole thing.

That really scared me! Here it was being thrown right in my face—all the reasons that had led up to the pact in the first place coming up to be reckoned with. What was wrong with me? What exactly was important to me? It was then that I got serious and devoted all my evenings for the next couple of weeks to working on her gift. 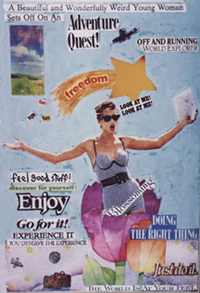 I found a small wooden box and began to collage it with photos and words cut from magazines. The top of the lid would represent her new freedom, a young woman in full blossom, off to discover the limitless world. The underside of the lid represented her spirituality, her gifts of perception, and symbols to remind her to keep following her own inner guidance. The bottom had snippets from her childhood, images from her favorite books and silly jokes we had shared. Inside were decorated envelopes with special mementos that only had meaning for the two of us.

The therapist must have known that the very act of creating the gift would have far more significance to me than the gift itself. And even though I couldn’t fool myself into thinking that this one gesture could make up for what had been lost, it was important to me that I’d kept my promise, and I wanted this to be a special day.

When the day arrived we headed for the first place on her list—a hip little café in Sausalito that I’d never even heard of before. I felt awkward sitting there with her, but the rest of the day unfolded as if someone had been running a few steps ahead of us making sure everything was perfect.

Next stop was the San Francisco Museum of Modern Art. I hated driving in the city. I get confused, she loses patience, and parking is next to impossible. It felt risky. But I drove straight to a parking spot that miraculously appeared a block from the museum.

The art was exciting—so far, so good—and then it was off to the exhibit hall at the California Academy of Sciences adjacent to Golden Gate Park where we would later picnic by the lagoon and exchange our gifts. Not only was there a parking space right near the main entrance to the hall, I gasped when I saw the huge banner above the door, “Rites of Passage from Around the World.” What kind of magic was this?

No one could have planned what was about to happen next. Inside the hall, we were introduced to a modern-day medicine man from Nigeria. Right on the spot, he offered to give my daughter her own personalized rite of passage ceremony. He gathered some of his friends around as witnesses, then poured water through her hair, reciting some poetic incantations intended to cut the ties from the past, and ended with wishes for good fortune on her journey into the next phase of her life. Afterward, as we made our way to the lagoon, there were no words to describe what had just happened.

We exchanged our gifts. She’d made a cut-out drawing of herself with elfish ears and feet. She was naked, straddling the globe against a starry sky and waving farewell. The picture said it all, “I am independent, I am unashamed, accept me as I am, I’m free to be me.”

The day ended with us sitting there by the lagoon and me thinking aloud, “The only thing left to make this day complete is for someone to come along and take our picture.” 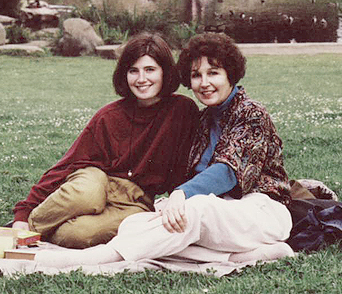 She was still angry when she left for school, but she would experience many more Rites of Passage since that day together. She’s moved to another country, and she’s married with two beautiful children. She’s still a creative, intelligent, and highly perceptive woman, and . . . at the time of writing this, she still had her little collaged box.

But she stayed angry with me for many more years until, by some Mysterious Grace, a new understanding grew between us. Maturity changes people. And now as I sit here admiring the photo taken by that stranger in the park so long ago, I embrace her forgiveness as the most welcome and blessed Rite of Passage in my life.