Joanna Mae-shun: A Case of Mistaken Identity
by Sharon Rockey 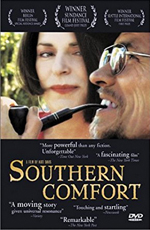 It was closing time at the library, and as I was standing in line to check out a book, something on the shelf caught my eye—a DVD with some “Film Festival Winner” stickers splashed across the front. The title was “Southern Comfort.” Since the staff was waiting patiently for us to leave, I didn’t bother to even read the film description. The Sundance endorsement was good enough for me, so I checked it out to watch later that evening.

It turned out to be a documentary so heart-wrenching, the emotional aftermath stayed with me for days. The subject matter was something unfamiliar to me—aside from the sensationalized Caitlyn Jenner news, of course. But it sparked a memory from something that had happened years earlier and prompted me to write the following email to my daughter:

Is it even remotely possible that you still have that old shoebox filled with the super-8 animated films, the ones I made back in the 70s and sent to you a few years ago?

Here’s my reason for asking. I’m hoping to find the last name of one of the students I had in my class in San Rafael. The class was either for 3rd, 4th, or 5th grade, which might be listed on the box. There was this kid in the class named Joe. His full name will be listed in the credits.

Let me know if you find anything.

Joe was a very sweet blue-eyed blonde, shy, cheerful, tall and thin, and noticeably effeminate. In fact, the very first day of the class, his mother dropped by and actually asked me to not do anything that might encourage his effeminate tendencies. Wow! That comment took me aback; but not wanting to jinx this freelance gig, I nodded OK, just to appease her.

To understand what came next, let me explain how these ten-session film animation classes were structured. On day one, the students each sketched out an idea for the storyline; then they all voted to pick their favorite one. I’d make a rough storyboard on butcher paper of the winning idea and hang it on the wall, so we’d know how many background scenes we’d need, what and how many characters there would be, and the general sequence of events.

The backgrounds were drawn on large sheets of art paper, then each student chose a task, like picking out a character in the story that they could draw, or cut out, or do the voices for on the soundtrack. Joe immediately decided he wanted to be a girl character, and I willingly let him, because by then, I had developed a real affection for this kid with the infectious grin. And besides, why not?

After the characters were drawn and cut out, all the movable parts— arms, legs, whatever—were cut off, then re-attached by threads and scotch-taped to the flip side, out of view. This allowed body parts to be moved for each camera shot . . . and voila! Animation!

I recall how much fun we all had working together—but the one thing that is deeply embedded in my memory happened on the day everything was ready to shoot.

We had broken up into several three-person teams and it was time to delegate who would do what on each team. One student would gather all the elements for the scene, one would position the moving parts for the animation phase, and one would help set up and operate the camera.

My team instructions went something like this, “Bobby: backgrounds!” “Betty: camera!” “Joe: animation!” But when I called out that last one, “Joe animation!” the only part Joe heard was “Joanna.” And for a second, time stood still. He thought I’d called him Joanna!

His face lit up. In fact, his entire body seemed to react as if it had been pre-programmed on a cellular level—as if someone had finally seen him and validated him for who he was, who he subconsciously believed, or most likely, was supposed to be. A second later, he realized his mistake, his face turned red, and the beaming smile disappeared. I brushed it off quickly as if I hadn’t noticed, and continued supporting him along with each of the other students.

Once the film was completed, we showed it for the parents and teachers, and, as expected, it was a big success. If Joe’s mother had any complaints afterward about how he’d played a female character, I don’t remember. In fact, I don’t even recall her being there. Or maybe he’d told her about it, and she was too mortified to show her face.

Now . . . lets fast-forward a few years to the day I ran into a teenage Joe and his mother on the street in San Rafael. At first, I didn’t recognize them, but she recognized me. She was extremely stiff and uncomfortable about this accidental meeting. Joe was dressed all in black, wearing various studs, piercings, and chains. His blonde hair had been dyed jet-black. Appearing in full-on Goth mode, his face was ashen and completely expressionless.

In those few minutes, I sensed a withdrawn teen who looked to be so beaten down, so lost and confused about himself, so damaged from living without the understanding or family support that he needed, that he had created a whole new image for himself—one as far removed as possible from his so-called unspeakable tendencies of the past. It was if he had assumed a persona that his mother could now apparently tolerate, or simply pass off as typical teenage rebellion. So, we stood there, making awkward small talk—and then it was over and they went on their way.

I wish I could turn back the clock to that day so I could pull him aside for a minute and whisper, “Joe, I hope you find the courage and freedom to discover and be who you are. Because I see you, and you have always been OK just as you are—which is fully complete and lovable.” Of course, that would not have been possible. It would have been totally inappropriate and a violation of his mother’s space. And chances are, he may not have wanted to hear it, or maybe he would not have even been able to hear it.

It breaks my heart to think about him. I wonder if he is even still with us today. Tragically, there was probably little guidance or assistance for his situation back then. Did he suspect that he had been born into the wrong body? Was such a concept even in anyone’s mind back then? Was he even allowed to ask?

If I just knew his last name, maybe I could find some link to him, find out how he is doing. I would remind him of our animation class, and I would tell him the things I regret not having said to him that day . . . standing on the street . . . in downtown San Rafael.

Unfortunately, the film was not found in that shoebox, so my search ended before it began.

About that documentary I mentioned earlier . . . it’s about the transgender community in the reddest area of the deep South and the love and support these people share, and a man’s final wish to just make it to one last conference—the one known as Southern Comfort—and how the community gathers around him to make it happen. But here’s a word of advice: have a goodly supply of Kleenex handy.

I recently learned that statistics estimate there are nearly 700,000 transgendered people living in this country!! 700,000!!! What the heck is going on? Is there a mass influx of souls returning at this particular time, experimenting or trying to get it right for this last ride home? It’s just so curious! There are so many stories begging to be told!

Someday I’d like to be able to connect with teens and preteens who are struggling with their own mistaken gender identities—and help them tell their own stories.