Her Place Near the River
by Sharon Rockey

We all have those special songs that evoke feelings from our past— the ones that stir up memories of love lost or reignite a long-forgotten sensation. Then there are songs that touch us so deeply, they resonate right down to our cells. These are the songs that represent such major transitions in our lives, they become enduring symbols of profound change and awakening. 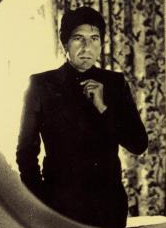 That song for me was “Suzanne,” by Leonard Cohen. I don’t know why it became such a part of my history, or why it affected me so.

Maybe it was the poignant melody or the poetry, or maybe it was the smell of the incense or the sounds of the waves that rocked my brother’s houseboat in Sausalito. Maybe it was whatever was in that pipe being passed around by kindred spirits. I’m sure it was a rare blend of all of those things, but most of all it was the time—the time when everything around us was shifting.

Decades later, just hearing the sound of the first few guitar chords would break my heart wide open all over again, as if I had been fused with the brilliance of Leonard Cohen and the mystery of someone named Suzanne. The song represented everything we were all feeling at the time—the longing for freedom, for beauty, for love. It bordered on the sacred.

I’m only telling you this so you will understand what I experienced that afternoon in 1996, standing in a little photographer’s studio in Northern California.

My brother and I had just returned from India and I’d taken some of the photos in to be enlarged. It was a small family operation. The husband did all the processing in the rear of the studio and his sprightly young wife worked the front desk. She seemed excited to see me when I returned to pick up the photos, but I didn’t know why.

She opened the envelope and fanned the photos out across the counter, admiring the ones of the Indian women in their festive garb. They reminded her of her own childhood, she said, and of the costumes that she and her mother had worn when they danced in cabarets in Montreal. I sensed that she wanted to tell me more.

She reached under the counter and pulled out a well-worn photo album. For the next several minutes we thumbed through the pages together, with her describing what life had been like in those days and pointing out how similar the costumes were.

“We lived upstairs in an old warehouse by the river,” she said. “It was a little scary for me at times. My mother was kind of a hippy and I never knew what to expect next. There were always rough men working the docks right outside and you could hear the boats coming and going and cargo being unloaded at night.”

She went on weaving her fascinating stories and ended with something totally unexpected. “Do you know who Leonard Cohen is?” I felt a slight chill and answered, “Yes, of course!” She said, “Maybe you’ve heard his song, ‘Suzanne’?” I let out an audible gasp and nodded, feeling a little disoriented and wondering what could possibly be coming next. Then she hit me with it, “Suzanne was my mother!”

I resisted my first impulse—to throw myself at her feet in solemn, grateful reverence. I felt so overwhelmed, I started stammering, trying to explain what an impact that song had had on me since first hearing it over 30 years ago.

It all made sense now:

Suzanne takes you down to her place near the river,
You can hear the boats go by,
You can spend the night beside her . . .

I was trying to not gush like some crazed woman, and of course, there was no way she could relate to anything I was saying—though she seemed to be aware that the song had a similar effect on other people.

She recalled how Suzanne and Cohen would dance in the street together into the night. And how later, after he’d become famous, they ran into each other at an event. She asked him if he would come and dance with her in the street again. But he had become too big for the likes of her, and he rebuffed her. Suzanne felt as if she’d been used, as if he’d taken the best part of her, written the song, then thrown her away.

That was so painful to hear and it felt as if a chunk of my beautiful memory had cracked and fallen away. My illusion of Cohen had been irreversibly crushed.

I told her how heartbreaking that was to hear and that I’ve always wondered about Suzanne, where she is today, and what she is doing. With that, she quickly put the album back under the counter and her whole demeanor seemed to change. In a somewhat dismissive tone she said, “I’m not in contact with her; I don’t know where she is.” Then she added, “The last I heard she was living on the streets somewhere in Los Angeles.”

I was stunned. No! No! No! Living on the streets? How could that be? First, the light surrounding my Cohen illusion had been dimmed, and now this? Could my long-held image of the beautiful, the legendary, the ethereal Suzanne, the one who had been part of my sacred memories be so carelessly and completely shattered?

I tried to probe for more, but she made it very clear that she had no interest in finding her mother or having anything to do with her. Is that why she had said, “Suzanne was my mother,” rather than is my mother? Yet curiously, she still had the photo album. I drove home completely unraveled. It would take time to process it all. It did take time. 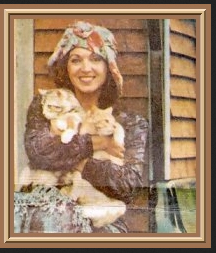 Years later, I was searching online and found a photo of Suzanne living in a small wooden structure on the back of a pickup truck in Santa Monica. It was a home she had virtually built herself from objects she’d gathered.

She was smiling and holding two cats. She looked beautiful; she looked free.

The article said she was a dancer and a masseuse, but that the photo had been taken before she’d fallen off a ladder and injured her back. I couldn’t stop staring at her face. 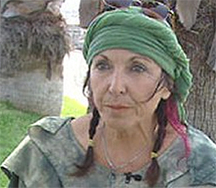 But her face in another, more recent, photo told a whole different story.

Cohen’s song had immortalized Suzanne as a mythical muse in the hearts and minds of millions. It had served as the theme music for the transitions in my life—it was the song that I associated with the period of awakening, a metaphorical rebirth. And in the end, the song, Leonard Cohen, and even Suzanne herself had all amounted to nothing other than one more illusion that I had to let go of.

Then again, what part of this illusion we call life do we not eventually have to set free?