I can’t recall exactly what triggered the incident, but it started like this: I was leaning against a sofa in a dimly lit room . . . gazing down at the face of a sleeping Marlon Brando . . . unable to resist the urge to do the unthinkable. 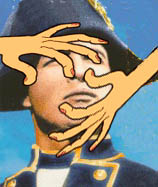 Now, let me make one thing perfectly clear — none of what happened that night was my fault. I attribute my actions to all those years of exposure to high altitudes. If I had been dragged into court on assault charges, the judge would have simply brushed it off with, “What else can you expect when a small town starry-eyed Midwestern girl has to work all those long stretches between L.A. and New York at 35,000 feet and then finds herself facing a situation like this? Case dismissed!”

Innocence notwithstanding, perhaps I should explain how I ended up on Marlon Brando’s sofa.

As a naive, fledgling drama queen working cross-country flights, I would occasionally create a blip on some high-flying showbiz exec’s radar screen. I had no silly illusions about making it in “the business,” but what adventurous twenty-something thrill-seeker could resist an opportunity to join an acting workshop at a major motion picture studio when it was offered to her?

One such offer got me past the gatekeeper at Paramount Studios. A couple dozen people were signed up for the workshop — a mix of small time actors, budding actors, wannabes, never gonnabes, and me. Joan, our acting coach had played a bit part in Brando’s film, One-Eyed Jacks. As luck would have it, Brando just happened to be filming Mutiny on the Bounty on a nearby sound stage, so Joan promised to arrange a drop-in coaching session with the big man himself.

I dismissed the Brando drop-in thing as hype, a teaser to keep us coming back. I for one was hoping it was hype. I mean, what if Marlon Brando were to actually show up? Would I be expected to do something with him. . . like maybe speak in complete sentences? No, that would never happen. But to my shock, he did show up, — twice — once with dripping wet hair fresh from his role at sea as Fletcher Christian.

A few of the eager and more experienced classmates jumped at the opportunity to do little impromptu sketches while Brando directed. It was fascinating to watch, but I stayed safely out of sight in the back row where I could keep a low-profile and avoid making eye contact. There was a limit to the amount of personal drama I could digest.

After our second and last session with Marlon, he unexpectedly invited the whole class up to his home atop Mulholland Drive. I immediately searched for the nearest emergency exit but before I could escape, I got swept along in a dumbfounded daze — out to the studio parking lot and bundled into somebody’s car. A minute later our small caravan was racing up the winding road.

Not much was registering in my brain. The crowded car, everyone talking at once, the head rush, my heart pounding, — everything was overlapping in and out of focus. Was I going to Marlon Brando’s house? Me? No way! We reached the crest of the hill before I had even begun to process it all.

Brando was waiting to greet us near the end of the driveway. My reaction upon leaving the safety of the car must have been due to an inability to connect with reality, or maybe something was preventing me from bolting, whatever the reason, I started walking bow-legged in huge deliberate steps like a swaggering cowboy with some big score to settle.

What was I thinking?

If it was just an insane attempt to get Brando’s attention, it worked. He looked at me quizzically and asked, “Where are you from?” My mind kicked into autopilot and I heard myself answer, “Illinois.” He said, “Oh, yeah? I’m from the Midwest too. Nebraska. I’ve just never seen anybody from the Midwest walk quite . . . like . . . that.”

We were ushered barefooted into a palatial Asian-style Hollywood showplace with highly-buffed dark teak floors, plush Oriental carpets and furnishings, and spectacular views.

Everyone congregated in the kitchen. The rest of the house was dark. Brando kept appearing, disappearing, reappearing. At one point, he perched himself on a tiled counter-top opposite me munching chocolate chip cookies from a bag, washing them down with diet strawberry soda. He said he was trying to watch his weight, but he looked fine to me in his T-shirt and jeans.

I was wearing a Bobby Brooks plaid wool skirt and matching vest left over from my home town back-to-school fall wardrobe sale — surely drab and conservative enough to set me apart even without the swagger.

Brando glanced over and said “What are you doing here? You don’t look very acty.” As if the mere fact that he had actually expected me to answer another question was not mortifying enough, had I also just been dealt a death blow to boot? He continued, “Every actor I know is in this business to try and compensate for something they think they don’t have. You don’t look like you are lacking anything.”

Now, a normal woman with half a shred of brain would have recognized this as a compliment you can sink your claws into and run with. It was an invitation to engage in a meaningful dialog with one of the most enigmatic and famous screen icons on the planet. But alas, at that moment I was experiencing the full bountifulness of lack, particularly in the area of verbal communication skills. The most I could manage to squeak out was a dismal, semi-audible, “Oh, . . . . . really?”

No! Wait! Had I actually just heard myself say, “Oh, . . . . . really?” Apparently so, because in an abrupt scene shift, Brando disappeared again. Everyone else was still chatting in the kitchen when I quickly excused myself to seek refuge in the nearest powder room where I could lock the door and hide until it was time to leave. But as I passed through the dimly lit living room, I noticed him lying there . . . Marlon . . . stretched out on his sofa with eyes closed.

(Right about here is where my “questionable behavior due to high altitude exposure” excuse kicks in.)

I tip-toed over and leaned against the arm of the sofa. As I stared at him, I was stunned by the chilling realization that I was about to reach down with my finger and poke his face — just a quick light poke so as not to wake him. But my hand lightly brushed his temple, his forehead and down one cheek. I swear, that’s all I meant to do. And then it hit me, “Wow, I am touching Marlon Brando’s face!”

But was I? Really? Something about it didn’t feel quite tangible enough. I wanted the full-blown experience of being there, to know I was actually feeling up this famous face. I guess I’d been too conditioned by the wide-screen illuminated version because here in the dark, lying on the sofa, it looked so . . . well, so small, almost insignificant. I just wasn’t getting the satisfaction I was craving so I cranked things up with more of a “Get Marlon Brando’s Face!” attitude. Like a blind man trying to describe an elephant, I began groping his face for something I could mentally hang on to and take away. Ah, yes, there . . . now I was starting to get it — and feeling dizzy with power.

He didn’t move a muscle, not the slightest flicker of an eyelash. Just for the record, I’ve known men who can fall asleep waiting for their own other shoe to drop — men who could sleep through an invasion of armor-clad Vikings clashing their way to victory at the foot of the bed. But there was no way this particular man could have slept through my groping, my probing, my frenzied exploration of each and every feature of his face. No matter how tired he may have been from a day of prop sea-water drenching on the Bounty set, this inscrutable actor had to have been on full alert — wide awake behind those closed eye-lids, taking it all in, wondering silently, “What the hell is this bow-legged woman from the Midwest trying to do?”

As the shock of that realization hit me, a strange hush settled over the kitchen. I looked up to see everyone huddled in the doorway watching me with expressions of amusement and disbelief.

This could have gone on record as my most humiliating and darkest hour had it not turned out to be an opportunity for my finest performance — my chance to prove I could be as “acty” as the best of them. I stood up, regained my composure, and with an air of utter confidence, I breezed past them with a sweet and compassionate smile and whispered, “It’s OK, he’s sleeping now,” jarring those smirks of amusement right off their wannabee-actor faces.

I never saw Marlon again either, but Marlon, wherever you are, thanks for the bizarre and twisted memory, thanks for the compliment, and thanks for . . . well . . . I guess the rest goes without saying.